Sicily is again the subject of a lesson of Eric Asimov’s Wine School; this time he speaks of Frappato on this New York Times’ article (here you can read it the complete post).

While it is true historically that Sicily’s best-known wines internationally were sweet, I would guess relatively few people in the last 20 years have seen or consumed a Sicilian sweet wine. A lot of bad ones are available, though, and the best known, Marsala, has unfortunately become a synonym for cheap “cooking wines.” Good Marsalas, like those from De Bartoli, can be exquisite, though expensive.

As for nero d’Avola, it became well known beyond Sicily in the 1990s, primarily because a few successful examples allowed Sicilian winemakers to focus on it rather than cabernet sauvignons and merlots designed to earn approval in the export market. While Sicilian nero d’Avolas back then won praise, many of the wines were heavy, out-of-balance or just plain bad. Now, the reputation is mixed for varietal nero d’Avola wines, though I have certainly had some excellent examples. 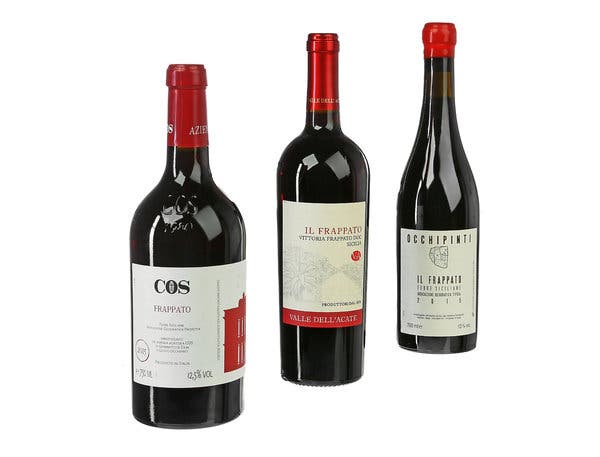 Nonetheless, nero d’Avola continues to be an important grape. In the southeast corner of Sicily around the city of Vittoria, it is often blended with frappato to produce what is now recognized as one of the island’s best red wines, Cerasuolo di Vittoria.

Did frappato and other newly anointed Sicilian red grapes like nerello mascalese simply pop into being through puffs of magic? Of course not.

They, along with nero d’Avola and many others, have long been grown on the island. For generations, they were made into bulk wines and shipped to northern Italy or France, where they were used to add color and power to local wines deemed too anemic on their own. They were also consumed locally in the communities where the grapes were grown.

So what happened? The great wine story of the 21st century has been the arrival in the global marketplace of wines that, for one reason or another, were either marginal or unknown outside their birthplaces. Consumers today have benefited profoundly from these newly available selections, whether the wines are made from grapes like grüner veltliner, teroldego or assyrtiko, or come from regions like the Jura and Ribeira Sacra.

Why Frappato rather than nero d’Avola? Frappato has a lovely floral freshness to it that takes well to a light chill. It’s a great summer red, and one to seek out year-round, if you value the freshness that comes from great acidity over power. Nero d’Avola is fuller-bodied and darker colored, with little of the lift or refreshing crunchiness that I love in frappato.

I have found a few varietal nero d’Avolas worth drinking, most notably, Arianna Occhipinti’s excellent Siccagno, in which the grape’s signature concentrated fruit flavor is tempered with energy and minerality. But I have found nero d’Avola works best in combination with frappatto in Cerasuolo di Vittoria: Nero d’Avola must account for at least 60 percent of the blend.

Frappato, the other component, makes an attractive varietal wine, though very few seem to be widely available. Still, the three wines I proposed suggest the frappato’s stylistic range.

The easygoing Valle dell’Acate was both the least expensive and the simplest of the three, with plenty of bright, earthy cherry fruit, though maybe with a slightly confected note. It’s fresh — as it should be — and refreshing, easy to enjoy with grilled fish or pizza.

The other two are different; more expensive but with more to offer. The COS was bright and fresh as well, and though it was just as airy, it seemed more substantial. The aroma was like inhaling a bunch of fresh flowers, with the life force and the ever-so-slight fetid quality often found in flowers and perfume. The result was a complexity that required repeated, pleasurable tastes to explore.

The third wine, the 2015 Occhipinti, seemed even more complex than the COS, while remaining fresh and elegant. It was stony, floral and lip-smacking, with a hint of bitterness and a dusty mineral touch to it that seemed to speak directly of where the grapes were grown. Superb.

Aside from the different vineyard sites, two significant differences set the Valle dell’Acate apart from the other two wines. First, it’s a year younger. Perhaps more important, it was fermented and aged in steel tanks, while the other two were fermented in concrete tanks.

If you remember from previous Wine School lessons, the intention of fermenting and aging in stainless steel is to preserve the immediacy of fruit flavors. The trade-off, in general, is that the wines will be simpler in texture and flavor, and will not age as well (though this is by no means a hard-and-fast rule).

Concrete tanks act very much like oak vats. They are porous like oak, allowing a micro-exchange of air, but, like older oak vessels, they do not impart flavors or aromas.

While the COS was fermented and aged in concrete, the Occhipinti was moved after fermentation to big barrels of Slavonian oak, just one of several variables that collectively account for differences in the wines. Clearly these two have more in common with each other than they did with the Valle dell’Acate.

Most people recognized frappato’s freshness and perfume, and felt it as an exceptional seasonal pairing. Martin Schappeit of Forest, Va., was fascinated by the tannins of the Occhipinti, which he described as “beautiful, energetic, structured, dynamic, electric, almost cabernet franc-like but lively.”

On the other hand, he said, his wife described the wine as “spicy and somewhat dirty,” which made me think that they have an excellent partnership, or at least a future in comedy.

Martina Mirandola Mullen of New York has spent a fair amount of time in the city of Catania, Sicily, which seemed to give her particular insight into these wines and how they reflect the place. Though she said frappato was one of her favorites, she noticed something additional in the Valle dell’Acate, the bottle that I characterized as simpler than the others.

“It was that dustiness, that slight grounding element that makes a wine a bit more serious than just light and bright,” she said. “It’s strange and fascinating because isn’t Sicily often like that? Beautiful, bright sights, people and food, but with a deep history that doesn’t allow that brightness to lack seriousness.”

So much in a glass of wine, though I saw it in the other bottles more than in the Valle dell’Acate. It’s worth opening another bottle to explore further.

More than any other beverage, wine has this ability to express culture. It’s what I love more than anything, and it is exactly why I find wine so exciting. This is more true now — with options like frappato and so many others newly available — than it has ever been before.