Terroir hunters love the stuff: a soil of salty ash, pumice and rock, steep slopes, and a star grape variety—Nerello Mascalese—that can channel intense minerality and that tastes like the lovechild of Nebbiolo and Pinot Noir. The appellation has attracted a flock of talented winemakers, some avant-garde, some seeking to revive the oldest traditions (three of them profiled below), and a new generation of drinkers who love a good story as much as a great glass. 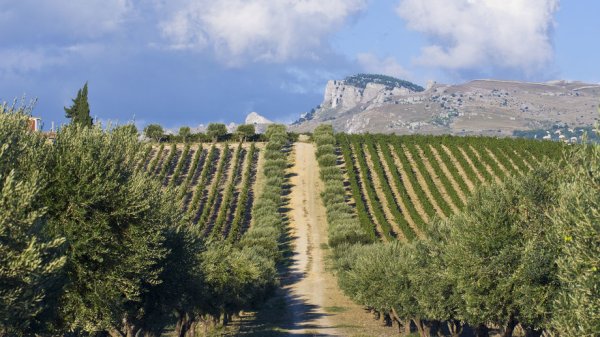 But it doesn’t end with Etna. Around the town of Vittoria on the island’s opposite coast, two generations of organically-minded vintners have managed to propel hyperlocal grape varieties like Frappato into international renown. In the north, there’s a Marsala revolution afoot. And due west on the even smaller island of Pantelleria, one of the quirkiest wines to achieve cult status.

Here, 7 bottles that put Sicily on the map of wine cool:

The C-O-S in COS stands for Giambattista Cilia, Giusto Occhipinti and Cirino Strano—three school friends who, in the early ’80s, started a winery that would grow into one of the leading labels not only in the region but in the country. COS produces organic wines from the indigenous grapes of Vittoria, like the Grecanico that goes into this saffron-scented, mineral-laden white—one of the first skin-contact, anfora-aged bottlings to break onto the international wine scene.

Giusto Occhipinti’s niece Arianna started making her own wine in 2004 at the young age of 21 from a couple acres of abandoned vines. Now, she farms her 30 acres of Frappato and Nero d’Avola grapes biodynamically, and her coveted bottles have been chronicled in countless publications and poured at dozens of natural wine fairs. She ferments this one, a vibrant, juicy red, in stainless steel using only the grapes’ native yeasts and a small amount of sulfur at bottling.

A self-taught, Belgian-born winemaker, Frank Cornelissen was drawn to Mount Etna’s volcanic slopes for their extraordinary and unusual terroir. There, he crafts wines according to a strict “nothing added” philosophy—no added yeasts nor any chemicals, including sulfur. Contadino, a light-bodied, cherry-inflected blend of Nerello Mascalese and other mixed local reds is the most accessible in his portfolio, but worth trying also are his anfora-aged ‘MunJebel’ wines and his top bottling, ‘Magma’, if you can find them.

Marco De Bartoli could be credited with reviving traditional Marsala production from its decades-long slump during which industrial versions flooded the market and aligned the category with cheap cooking wine. If you’ve never tasted good Marsala, look for his solera-aged wines, such as Vigna La Miccia. When De Bartoli’s children took the helm, they added a new line of dry wines made from Grillo (the Marsala grape), including this zero-dosage sparkler that makes appearances in top wine bars around the country.

Zibibbo, the most fun-to-pronounce wine grape variety, is Muscat of Alexandria by another name. This one grows on Pantelleria—the tiny volcanic island off the coast of Sicily known more for its caper production than for wine. It’s skin-fermented, wild, and both succulent and savory. Plus, it’s made by an eccentric winemaker who would be a dead ringer for Doc from Back to the Future if Doc had an epic mustache. Miniscule amounts of it exist, so be sure to snatch one up if you see it on a wine list. More likely, you’ll see it in your wine-centric Instagram feed.

For decades, Salvo Foti served as a viticultural advisor for the best estates on Etna and in eastern Sicily. When he started I Vigneri—more a collaboration with local growers than a one-man show—he acquired old vines on the north side of the volcano which he works by hand and by mule (the site is impossible to farm any other way) and two high-altitude plots due west in Bronte. Foti makes notable whites and reds, but this rosé from Alicante grapes is arguably the area’s best.

The ‘Anna’ in question here is Anna Martens, a transplant winemaker from Australia and relative newcomer to the Etna scene. She and her husband Eric Narioo, a London-based wine importer, were drawn to the volcano the way most are: by a flavor that couldn’t come from anywhere else. Together, they farm 15 acres biodynamically and foot-stomp and ferment this Nerello Mascalese blend in a 250-year-old palmento—one of the area’s historic traditional winemaking facilities.